A New Condo Could Replace This Strip Plaza in Burlington

While it seems lately that Burlington city councillors have been doing the opposite of what their residents want, approving more condos in the downtown Burlington area, there are other parts of the city where redevelopment being proposed on existing commercial does look like it provides an injection of life.

A new plan has been proposed to revitalize an existing strip mall at 5353 Lakeshore Road, near Burloak Drive and Lakeshore close to the city limits with Oakville. The site is currently the home of the Lakeside Shopping Village. 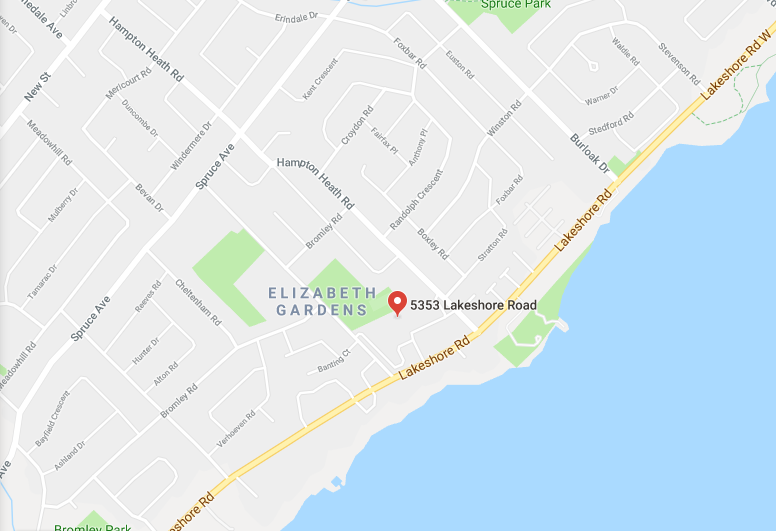 The mall contains a variety of amenities and services, such as a medical office, a hair salon, two small restaurants, a Tim Hortons, Shoppers Drug Mart and a Food Basic. There is also a Husky gas station, barber shop, a Napoli Pizza and a bookstore at an adjacent property.

Photo courtesy of the City of Burlington

Here is a detailed sketch of the site plan, as depicted in this city issued notice on open houses. The darkest gray hues indicate high rises, while the middle gray and lightest gray depict mid-rises and low-rises, respectively. 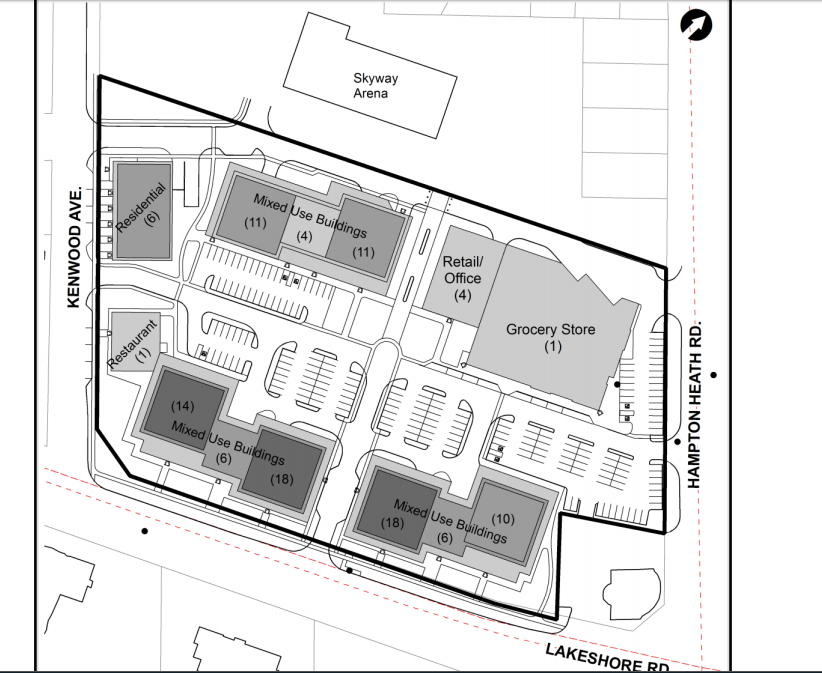 As you can see, there are plans to keep the grocery store. The redevelopment property is intended to look like this, according to the applicant's urban design brief: 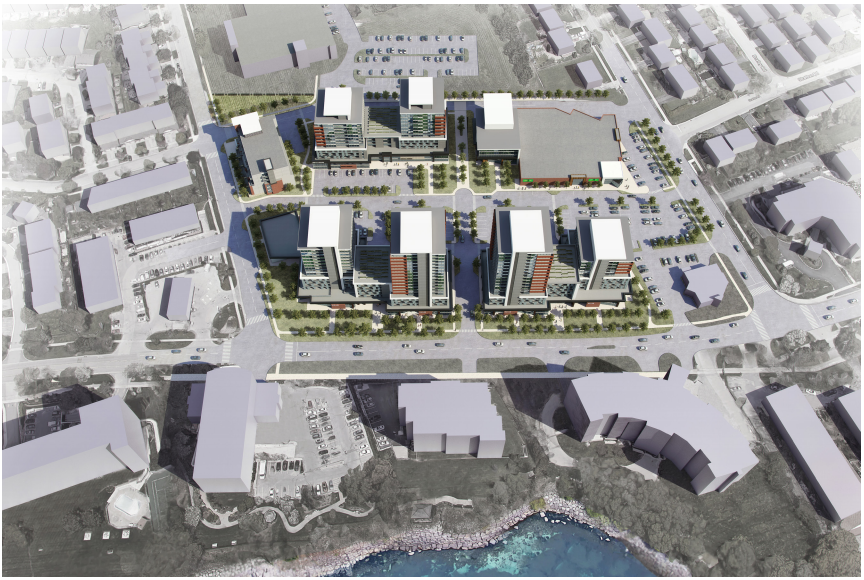 Here are some close-up renditions of the mid rise buildings planned for the site: 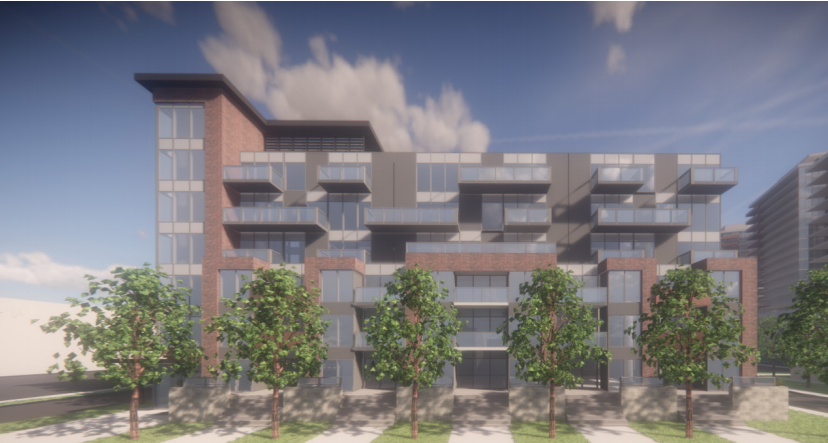 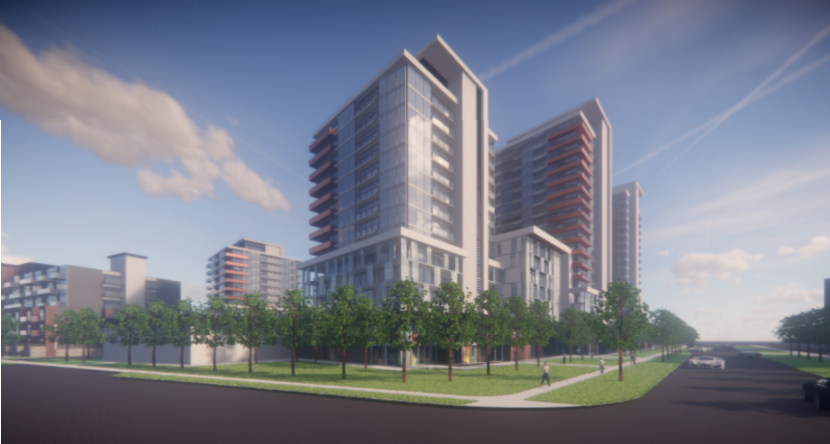 In terms of public transit connections, the planning justification report shows that has connections to Burlington Transit through Routes 20, 40 and 301. 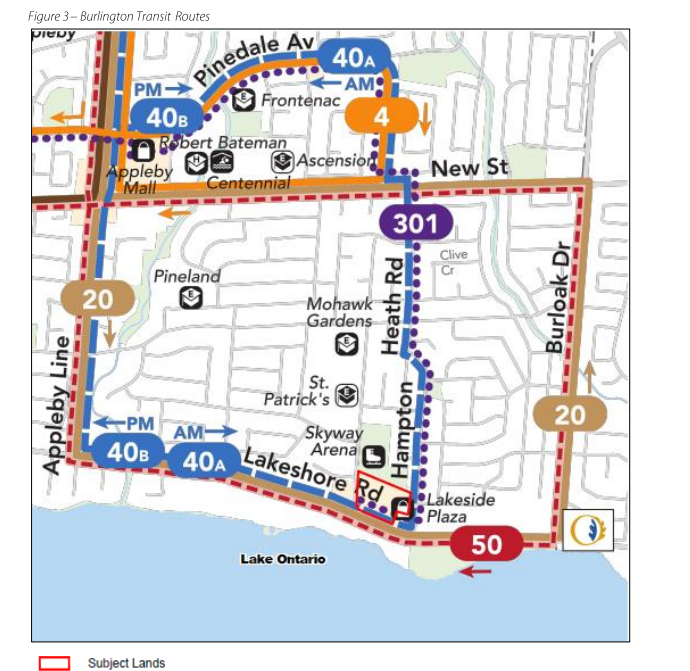 A shadow study was done by the applicant in March and June, and according to them the shadow impact is reasonable while balancing the preferred location of towers on the site, with the impact being lesser during the summer solstice. Overall, as the towers are placed in a east-west direction, the impact of shadows will be limited to small durations of passing shadows. 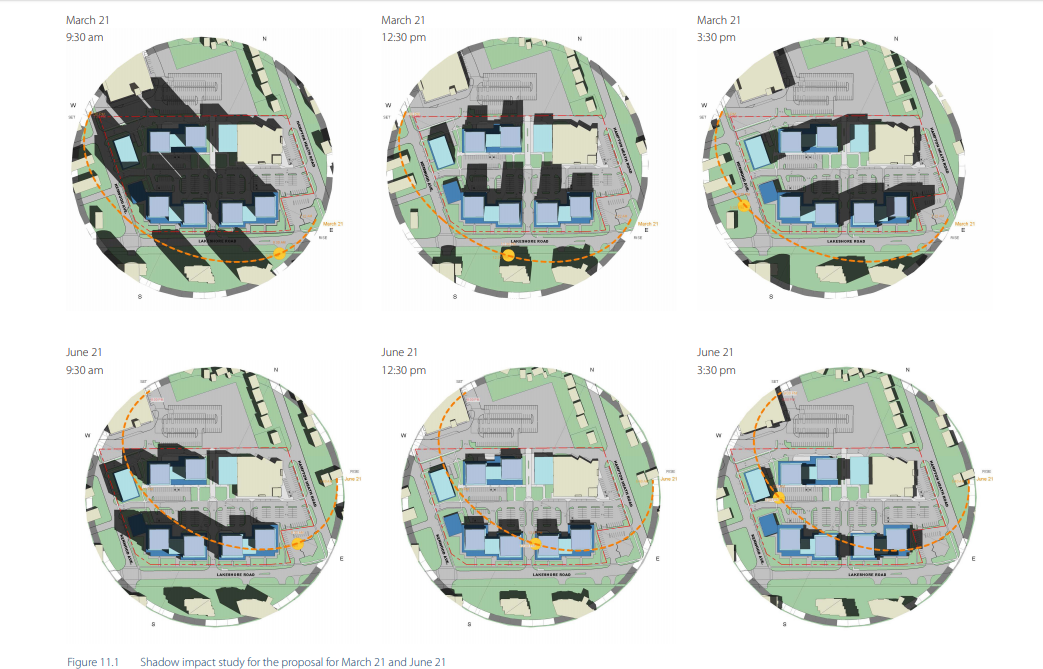 People may be wondering if the height of the proposed buildings were normal within the range of this site. A height study indicated that many of the existing condos along Lakeshore Road are around 8 to 12 storeys, and the new buildings being proposed were the ones from 14 to 18 storeys. However, there are a few structures around Hampton Heath Road that are 1 to 2 storeys.

A noise study that was done showed that future traffic sound levels during day and nighttime will exceed Ministry of Environment guidelines, there are feasible means to reduce sound levels to acceptable limits. Forced air ventilation systems, noise warning clauses and property line acoustic barriers were some examples cited.

This application has only just been introduced for public consumption. If you wish to get more information, the second public open house is on August 8 and runs at 2 pm to 4 pm, then again at 7 pm to 9 pm. It will be located at 5353 Lakeshore Road inside Unit 11.

In principle, the notion of redeveloping a strip mall like this with a vast parking lot that looks mostly empty with more mixed use development is reminiscent of the ideas outlined in the book Retrofitting Suburbia by architect Ellen Dunham-Jones about how existing suburban developments can be redesigned into more urban and more sustainable places.

Lakeside Plaza is an intriguing example of that happening, and it will be interesting to see how things unfold.