While it's no secret that homes are incredibly expensive in Oakville, Burlington, Milton and surrounding cities, all levels of government were forced to take action when real estate prices in the GTA skyrocketed in winter 2017.

Over a year ago, bidding wars and crowded open houses became the norm. In fact, it wasn't particularly odd to see a fairly average home—especially a detached one—sell for $100,000 or more over asking.

When the average price of a detached home in the 905 area hit $1 million, the provincial government introduced the Fair Housing Plan (which, most famously, imposed a 15 per cent tax on foreign buyers and speculators) and the federal government introduced the OSFI stress test (which required potential buyers to qualify at higher rates than they'd ultimately be paying).

Now, a blog post from Penelope Graham, the managing editor at Zoocasa, has broken down the impact the stress test—and other seasonal factors—has had on the Canadian market.

According to the post, which references data from the Canadian Real Estate Association (CREA), national home sales and prices slowed slightly in October, pushed lower by the impact of the mortgage stress test, combined with seasonal factors.

Graham says the latest report from CREA reveals the number of homes exchanging hands in 17 markets across Canada fell by 1.6 per cent from September, with overall activity down 3.7 per cent from the same month in 2017.

CREA says that sales remain below the 10-year average.

According to the report, Greater Vancouver and Fraser Valley saw the greatest decline in sales, which was partially offset by gains in the Greater Toronto Area and Montreal.

What impact has this had on prices?

The report says the average home value decreased 1.5 per cent to $496,800 - the first aggregate price drop since May. Removing Toronto and Vancouver from the equation, however, would reduce the average to just $383,000. 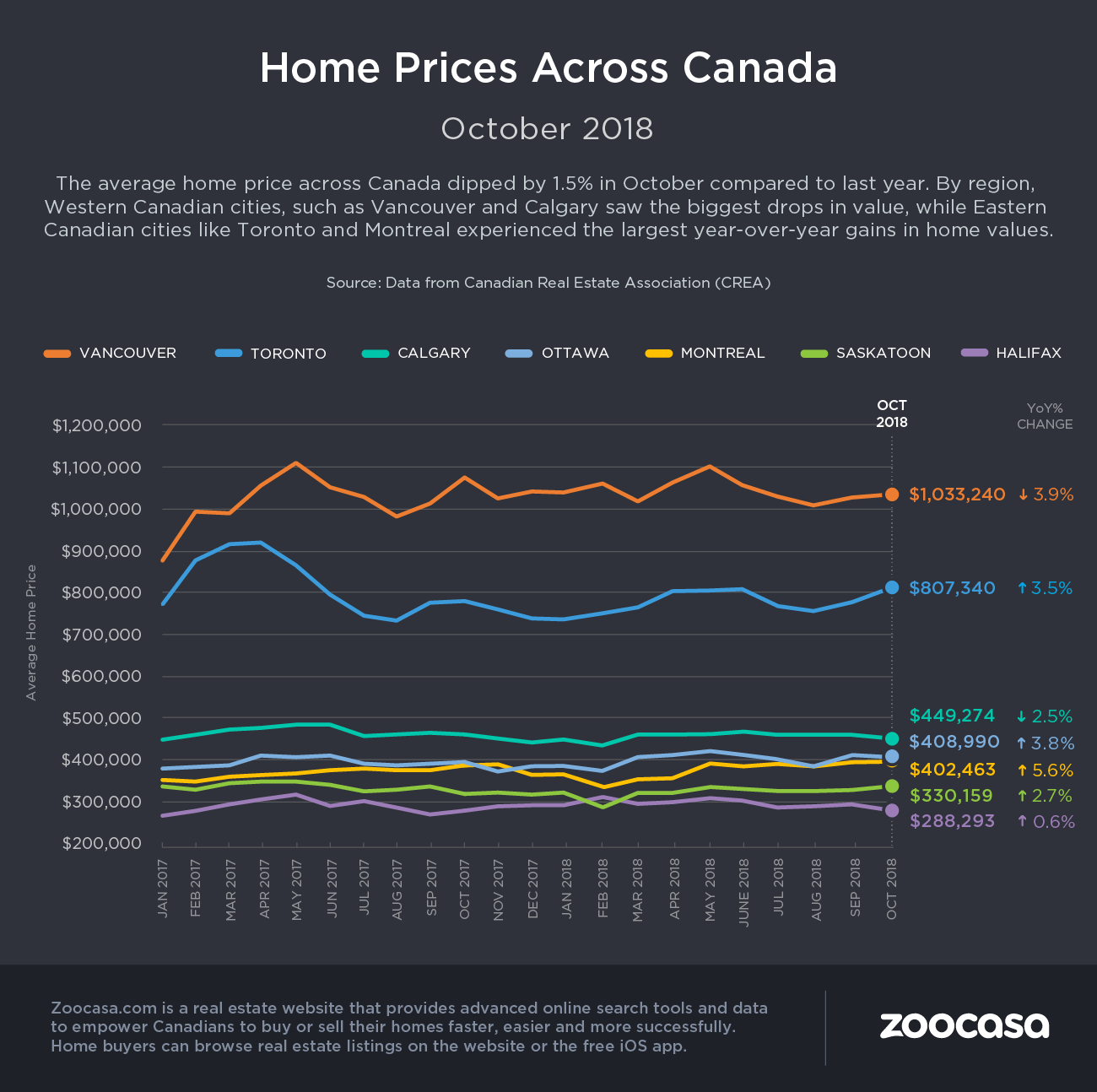 The mortgage stress test, which requires borrowers to qualify for a mortgage rate roughly 2 per cent higher than the one they'll actually pay, is fuelling the slowdown in sales activity.

"However, its impact has been felt unevenly across the country; while it has brought some much-needed balance to overheated markets, smaller locales are experiencing significant chill," says CREA President Barb Sukkau.

"This year's new mortgage stress-test has lowered how much mortgage home buyers can qualify for across Canada, but its effect on sales has varied somewhat depending on location, housing type, and price range."

The report says some markets have been hit harder than others.

In the report, Chief Economist Gregory Klump says that declines in the largest markets have effectively dragged down the national average, while sellers in slower markets are experiencing challenging conditions.

"National sales activity lost momentum in October. In part, this reflects waning activity among some urban centres in Ontario's Greater Golden Horseshoe region and the absence of an offsetting rise in sales in the Lower Mainland of British Columbia," he says.

The report says the number of newly-listed homes fell this month by 1.1 per cent, with the greatest contractions in the GTA, Calgary and Victoria, while rising in Edmonton and Greater Vancouver.

"However, it wasn't enough to offset slower sales; the national sales-to-new-listings ratio fell very slightly from 54.4 per cent in September to 54.2 per cent - within the long-term average of 53.4 per cent, and indicating well balanced conditions," the report reads.

"Total national inventory, which is represented by the number of months it would take to sell off all available homes for sale, clocked in at 5.3 - that's within the long term average, but varies by region, with supply much higher in the Prairies, Newfoundland and Labrador. Ontario and Prince Edward Island, however, have inventory below the long-term average."

Some home types are also selling faster than others.

Not unexpectedly, condos and apartments continue to lead housing market price growth, rising 7.4 per cent year over year. While this might sound surprising, it has much to do with the fact that condos are the last affordable housing type in hot markets. Naturally, townhouses followed at 3.9 per cent, while detached home prices remained relatively flat, with no growth in the two-storey segment. One-storey dwellings posting only a 0.6-per-cent gain.

As for what's happening in Ontario, the report says the pace of price gains has been rising in the province and especially within the Greater Golden Horseshoe, up 9.3 per cent in Guelph, 6.8 per cent for Hamilton real estate in Hamilton-Burlington, 6.3 per cent in Niagara, 3.6 per cent in the GTA, and 2.2 per cent in Oakville-Milton.