A Mississauga resident has decided to apply for a job that probably very few in the political sphere would deliberately seek out...being leader of the Ontario Liberal Party.

Alvin Tedjo made the announcement this past Sunday at the Hilton Garden Inn in Oakville. He ran as the party’s candidate in Oakville North-Burlington in the 2018 election, a past director of government relations at Sheridan College and advisor for the provincial Ministry of Training, Colleges and Universities. 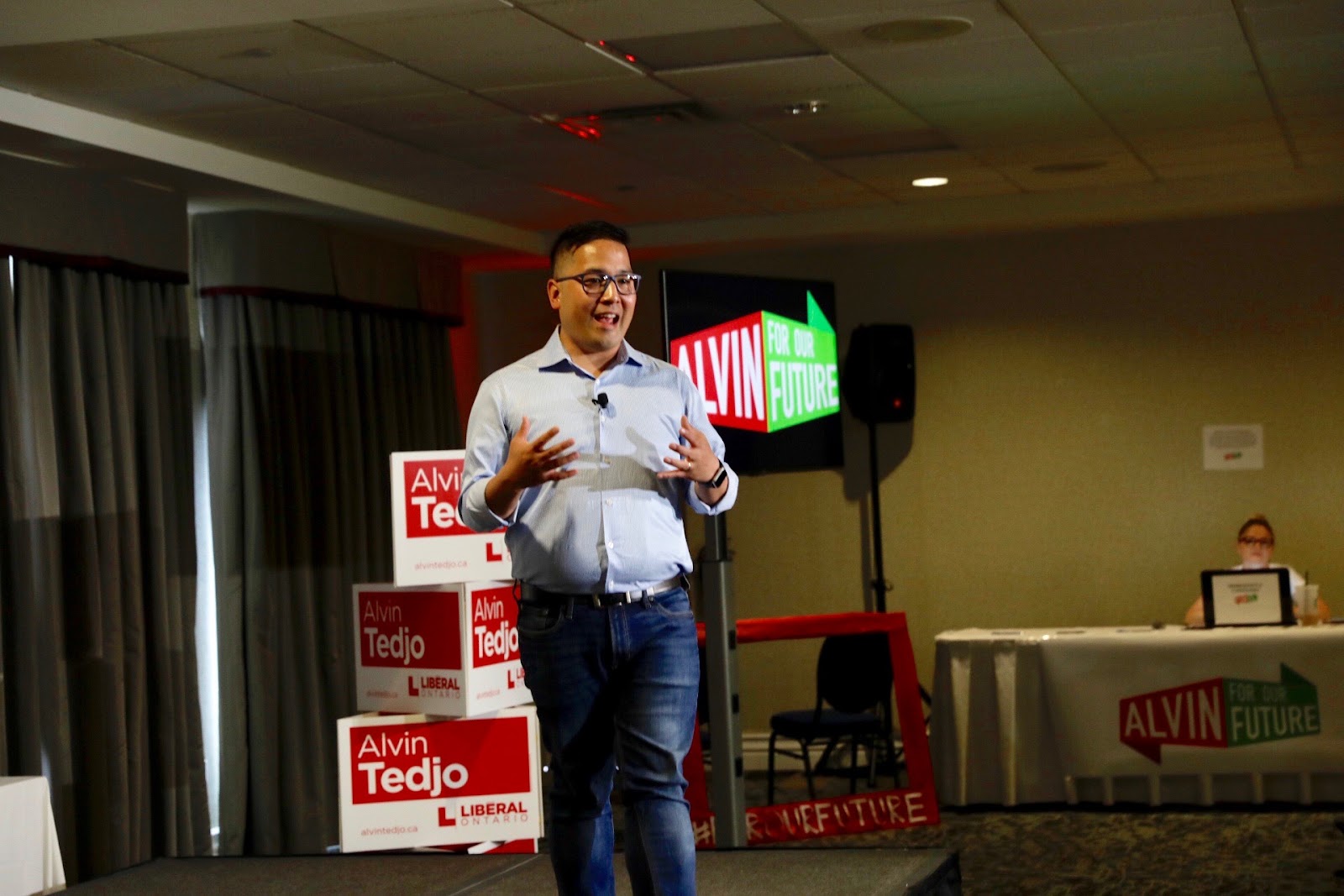 Tedjo also ran for a Mississauga city council seat in 2014.

In a speech with close to around 200 supporters, Tedjo outlined the issues he believes are facing Ontario and put forward some ideas for his vision of the party and the province.

“We can’t afford to wait to address the existential issues of our time. A rapidly changing economy, the real effects of climate change, and an education system that needs to re-tool and keep up. How we respond to these challenges will literally shape the world we’re leaving for the generation that will follow us,” Tedjo said in his remarks. 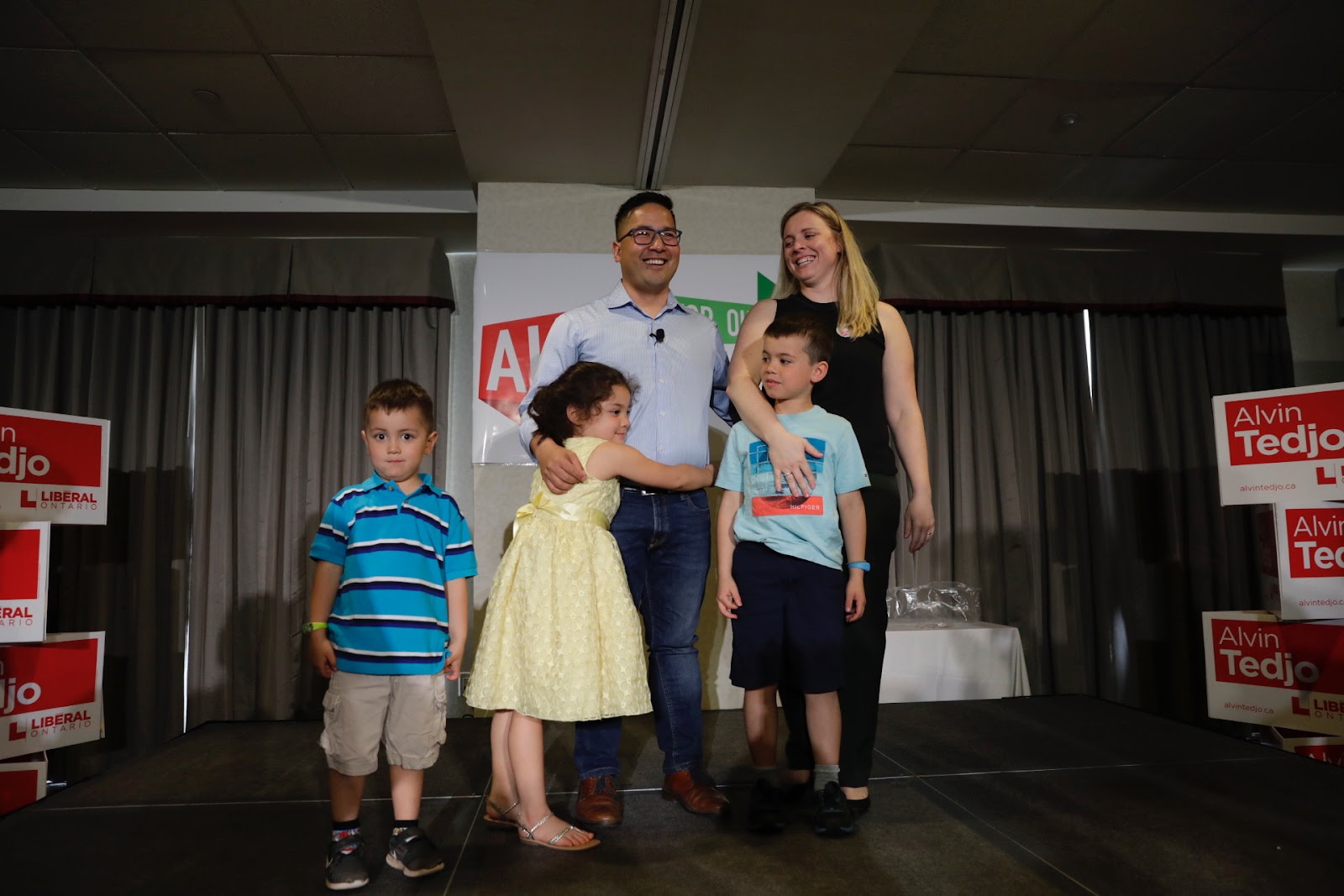 Tedjo with his wife Rebecca and three children

Tedjo acknowledged the “decimation” the Liberals received in last year’s election, when the party was reduced to seven seats after 15 years in government, and that the party didn’t listen to people who “didn’t see themselves reflected in (the Liberals’) priorities.”

So far the unofficial leadership race is starting off on amicable terms (organizers don’t expect a formal race to begin until 2020). Fellow leadership candidate Steven Del Duca, the former provincial transportation minister in the Kathleen Wynne government who lost his seat during last year’s vote, took to Twitter to welcome Tedjo into the contest. 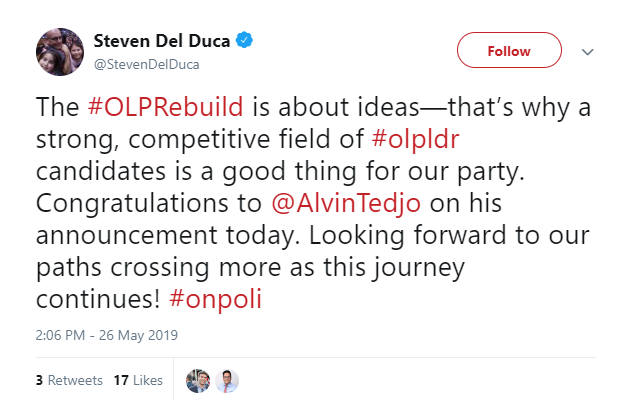 Besides Tedjo and Del Duca, former cabinet minister Michael Coteau has announced his candidacy, while another minister, Mitzie Hunter, is also mulling a bid.

To describe the Ontario Liberal Party, an organization which has barely registered on the public’s radar for the past year as the governing PCs and opposition NDP carved out space in the debate over the government’s recent funding cuts and other issues, as having an uphill battle to get back into relevancy would be an understatement.

Recently, two Liberal MPPs announced they were seeking greener pastures (one accepting a role as head of Massey College and the other is seeking a federal MP nomination), which reduces the OLP caucus down to five members. A provincial party currently requires a minimum of eight members to qualify for ‘official party status,’ which would give them access to funding and regular intervals at questioning the government in the Legislature. 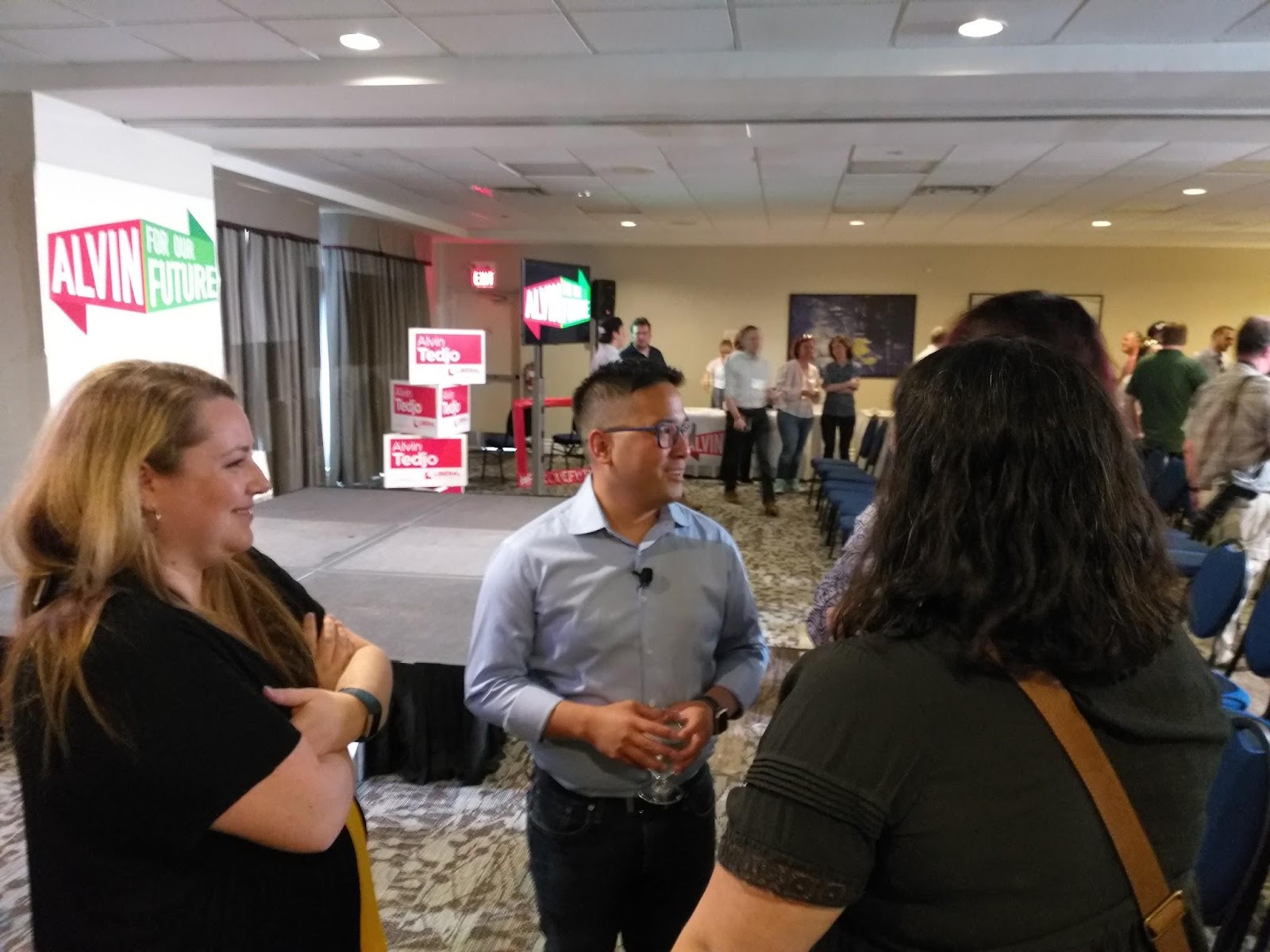 With five members, they could hold their regular MPP meetings around a coffee table at Tim Hortons.

But there may be some light at the end of the tunnel. The combination of the Liberals without the unpopular Kathleen Wynne at the helm and the unpopularity of current premier Doug Ford has put the party in first place in a recent poll. But people can be fickle, as that same poll showed voters prefer Toronto Mayor John Tory, a former Ontario Conservative leader, to lead the OLP into the next provincial election.

Although seeing the Liberals back into contention may be good news for party activists, the fact is that the ‘Liberal’ brand is still strong enough at this stage without a permanent leader to define its message to voters yet. We’ve seen how federal Liberal leader Justin Trudeau took that party from third place to majority government in 2015.

But that same Trudeau is now facing the possibility of being a one term prime minister, as other new parties such as the Greens are making headway in voter support.

Perhaps Tedjo has enough appeal in his narrative as a so-called “outsider candidate” who can make a clean break from the previous Wynne government, as all his other competitors came from that past government.