Have you been feeling bluer than usual this month?

If so, it might have something to do with the extreme lack of sunlight we've been experiencing in the GTA.

According to a recent Weather Network report by meteorologist Brett Soderholm, this November has been the Toronto area's cloudiest month since December 2014.

"With a whopping average cloud cover of 88 per cent during daylight hours at Toronto International Airport, there have been precious few hours of unobscured sunlight to brighten your day, or your mood," the report reads.

"Combined with below seasonal temperatures, persistent precipitation, and twice the monthly average snowfall recorded, it's no wonder so many people are already feeling the winter blues."

The Weather Network says that, since Nov. 1, nine days were 100 per cent cloudy (no sun visible at all); 22 days had an average cloud cover of 80 per cent or more, Nov. 22 was the only day cloud cover was below 50 per cent ; and one entire hour of daylight was lost.

The Weather Network says the "notoriously cloudy metropolis of Vancouver" managed to outshine Toronto this November, with an average cloud cover of 79 per cent. 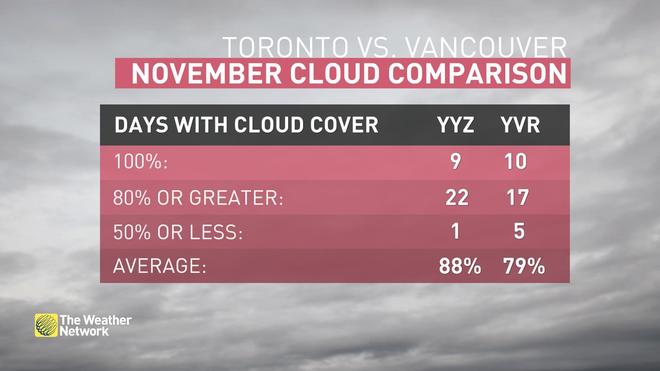 So, why has it been so cloudy?

"Even though Toronto only had a handful of days where significant rain or snow fell this November, there were 24 days (including today) that recorded at least trace amount of precipitation (drizzle, light rain, or flurries) at Toronto International Airport," the report reads.

The Weather Network says this largely came from multiple systems passing near or over the region, alongside persistent bands of lake-effect snow - both of which generated significant and persistent cloud cover.

"With minimal sunlight to help dry out the ground after this precipitation fell, a negative feedback cycle began: more moisture was available to be evaporated, which formed even more clouds, and made it that much harder for the sun to break through."

In even worse news, the report says that December won't be much sunnier.

Are you tired of all the cloudiness in Mississauga?

5 Best outdoor winter activities outside...
Top 5 places to get chocolate in Burlington
5 Hotspots outside of Halton for a Family Day...
Top 5 bakeries in Burlington
5 Best romantic restaurants outside Halton
END_OF_DOCUMENT_TOKEN_TO_BE_REPLACED