Is a New Mosque Coming to a Burlington Neighbourhood?

it’s one of the newest neighbourhoods in Burlington.

And it may soon be home to a new place of worship.

In Alton Village, there is a street called Palladium Way that already houses St. George’s Anglican Church and the New Apostolic Church of Halton.

The Halton Islamic Association (HIA) recently made an application to develop a mosque near the intersection of Appleby Line and Hwy. 407.

Below is an artistic rendition of said mosque: 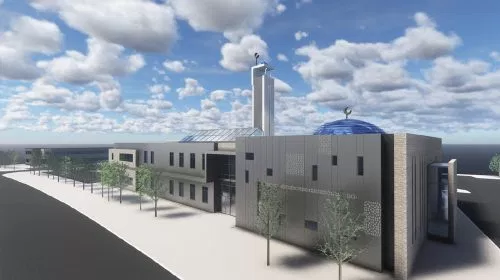 The plans also include a prayer hall, gymnasium, classrooms, banquet room, and administrative offices. In addition, a two-storey commercial office building with limited retail and medical office uses will also be included on the site, as seen below in its current state:

On Jan. 8, a public meeting was held at the Haber Recreation Centre to present the applicant’s proposal, which was attended by members of the HIA as well as nearby residents of Alton Village and the surrounding area. The meeting was also attended by Burlington Mayor Rick Goldring, Coun. Blair Lancaster, and deputy city manager Mary Lou Tanner. 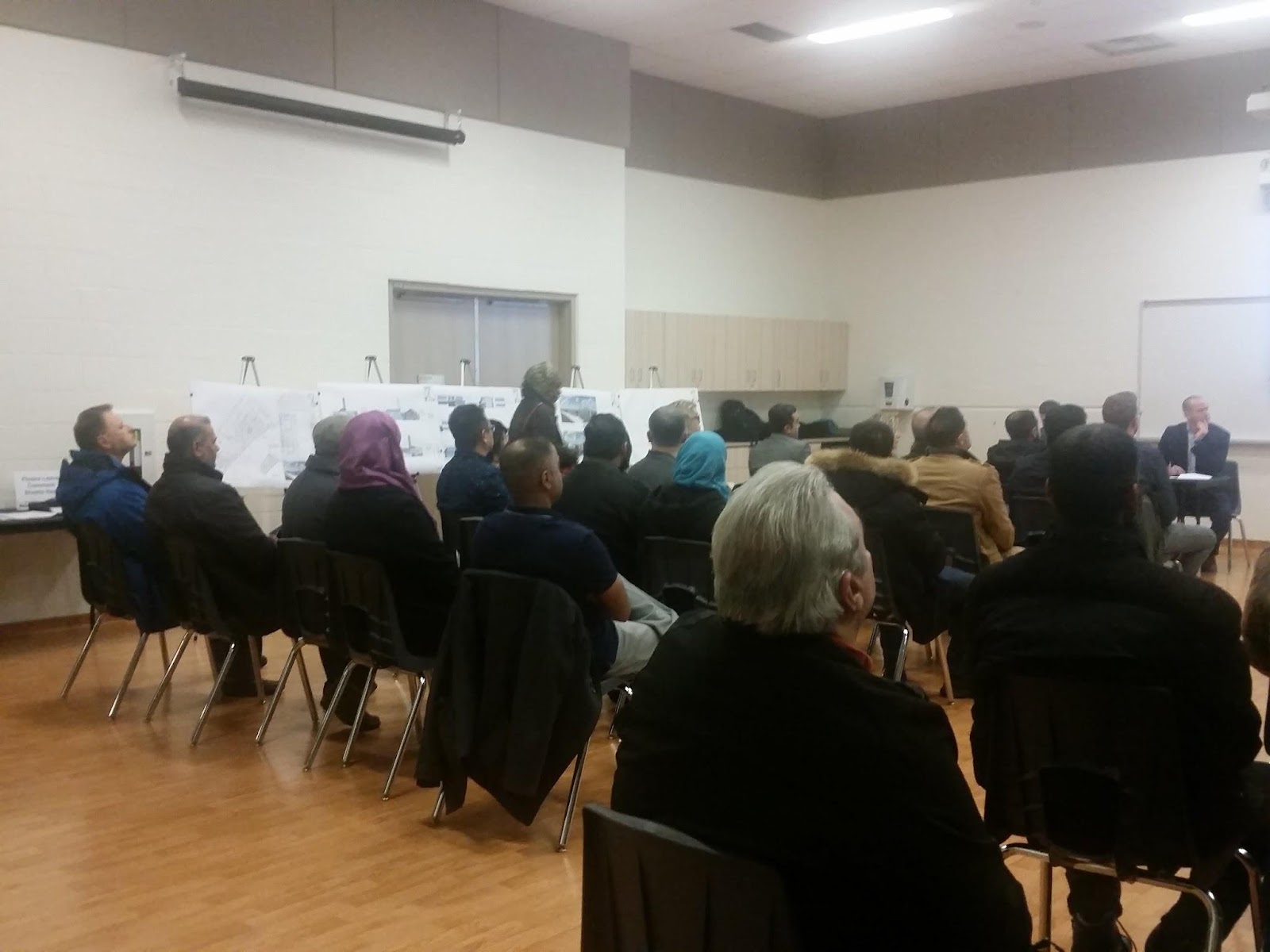 A number of display boards were present in the room, showing the various layouts and proposed renditions of the mosque / office building. 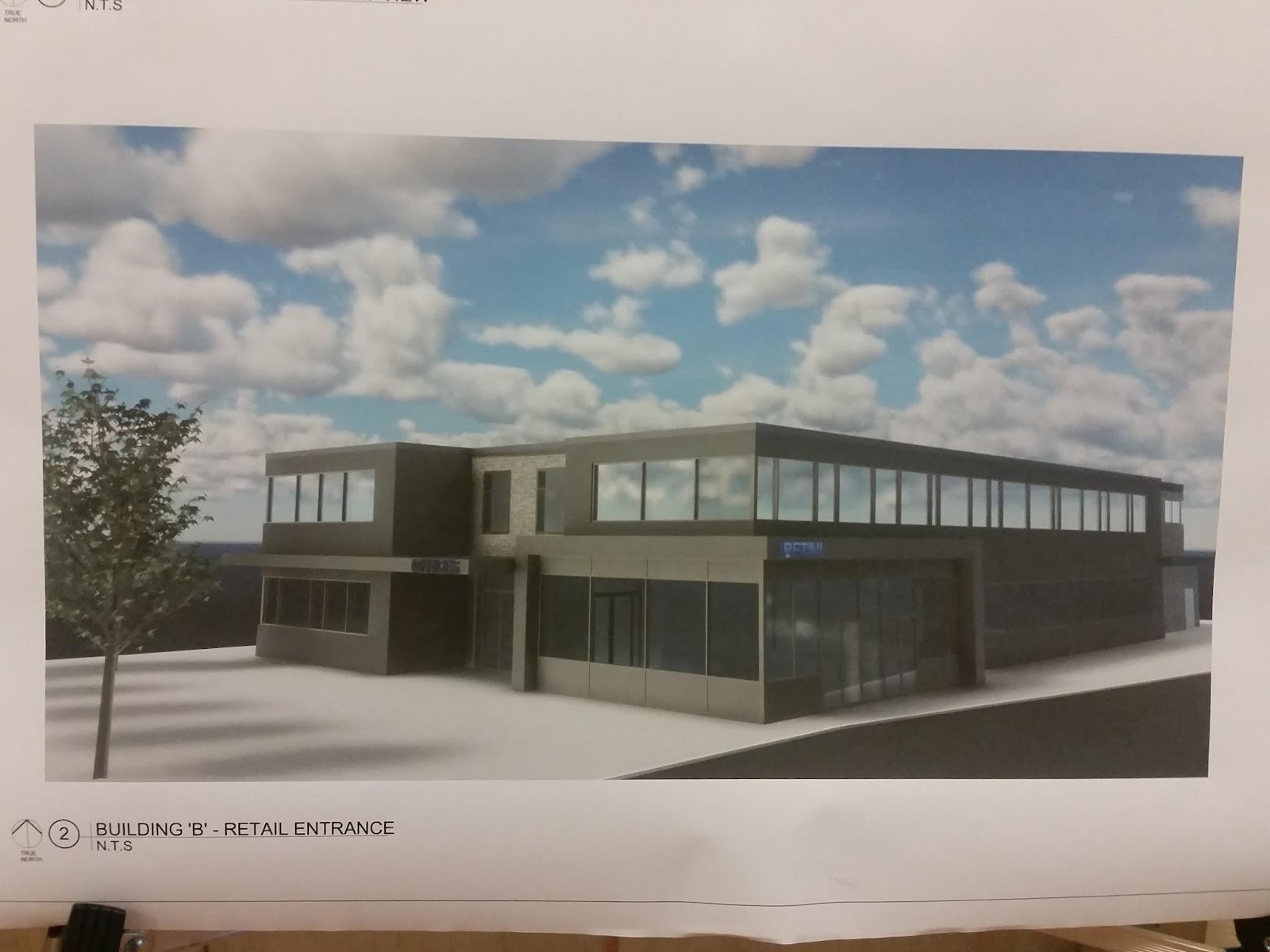 Here is the proposed floor plan: 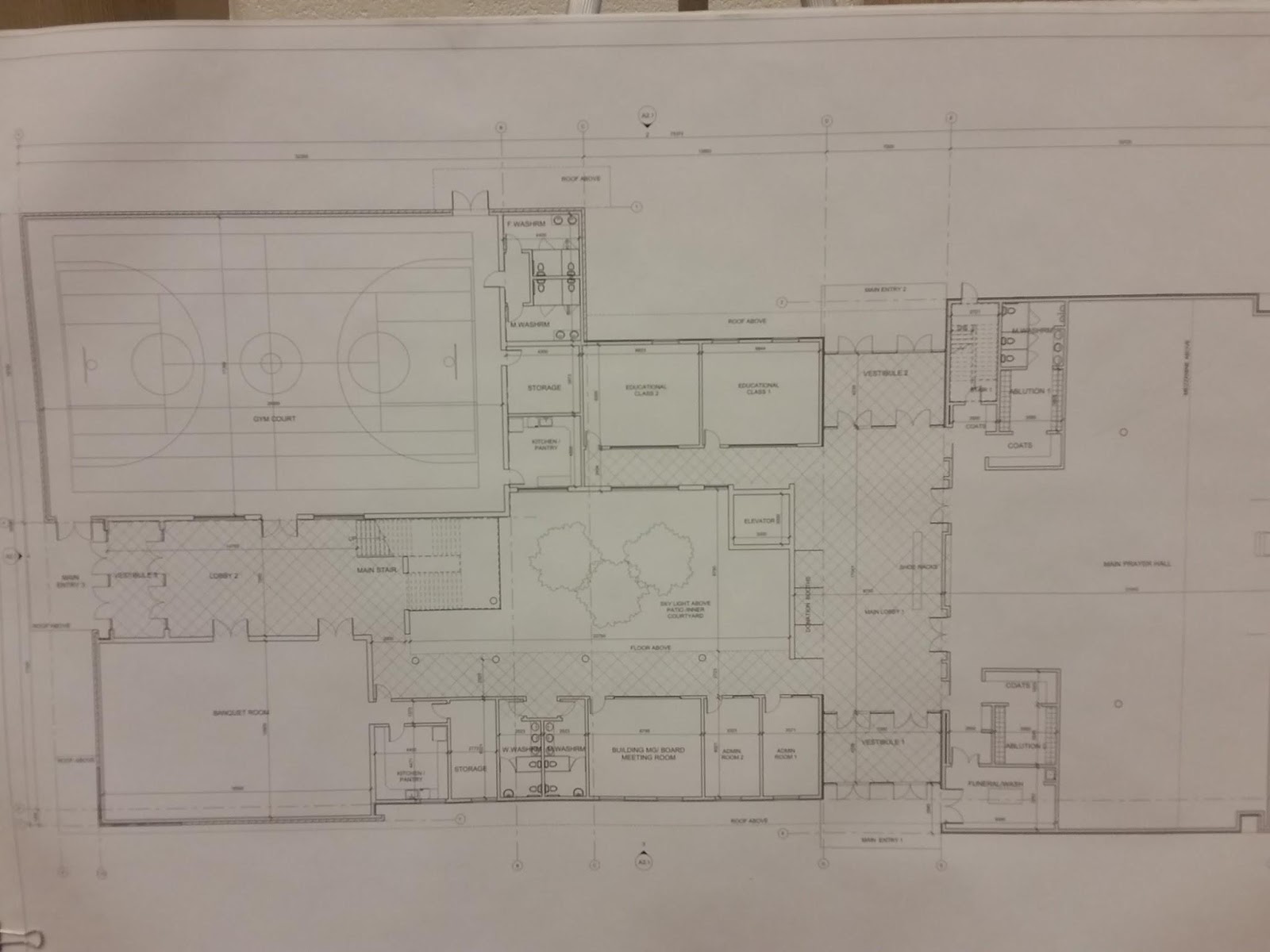 An aerial bird’s-eye view of the site: 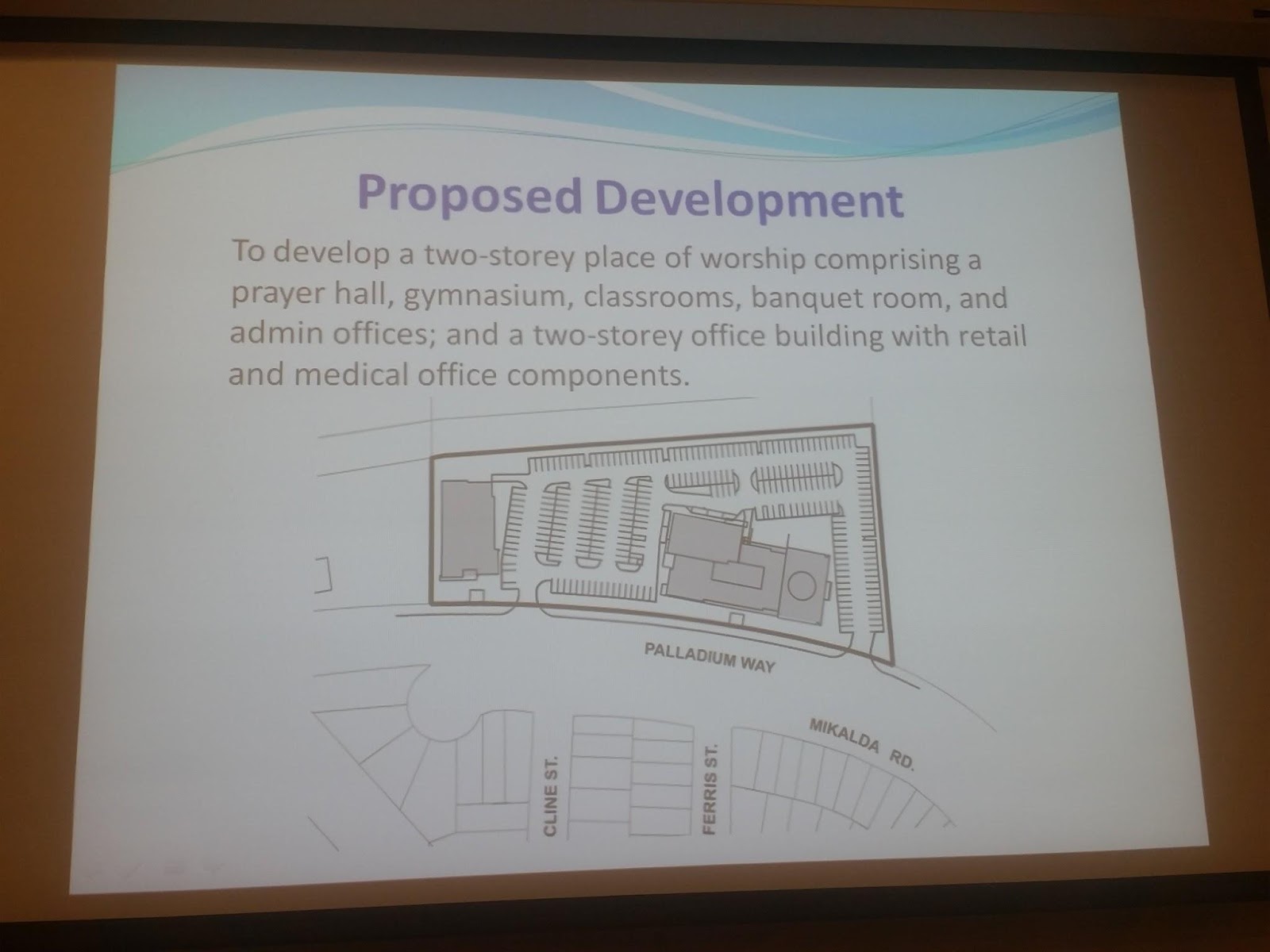 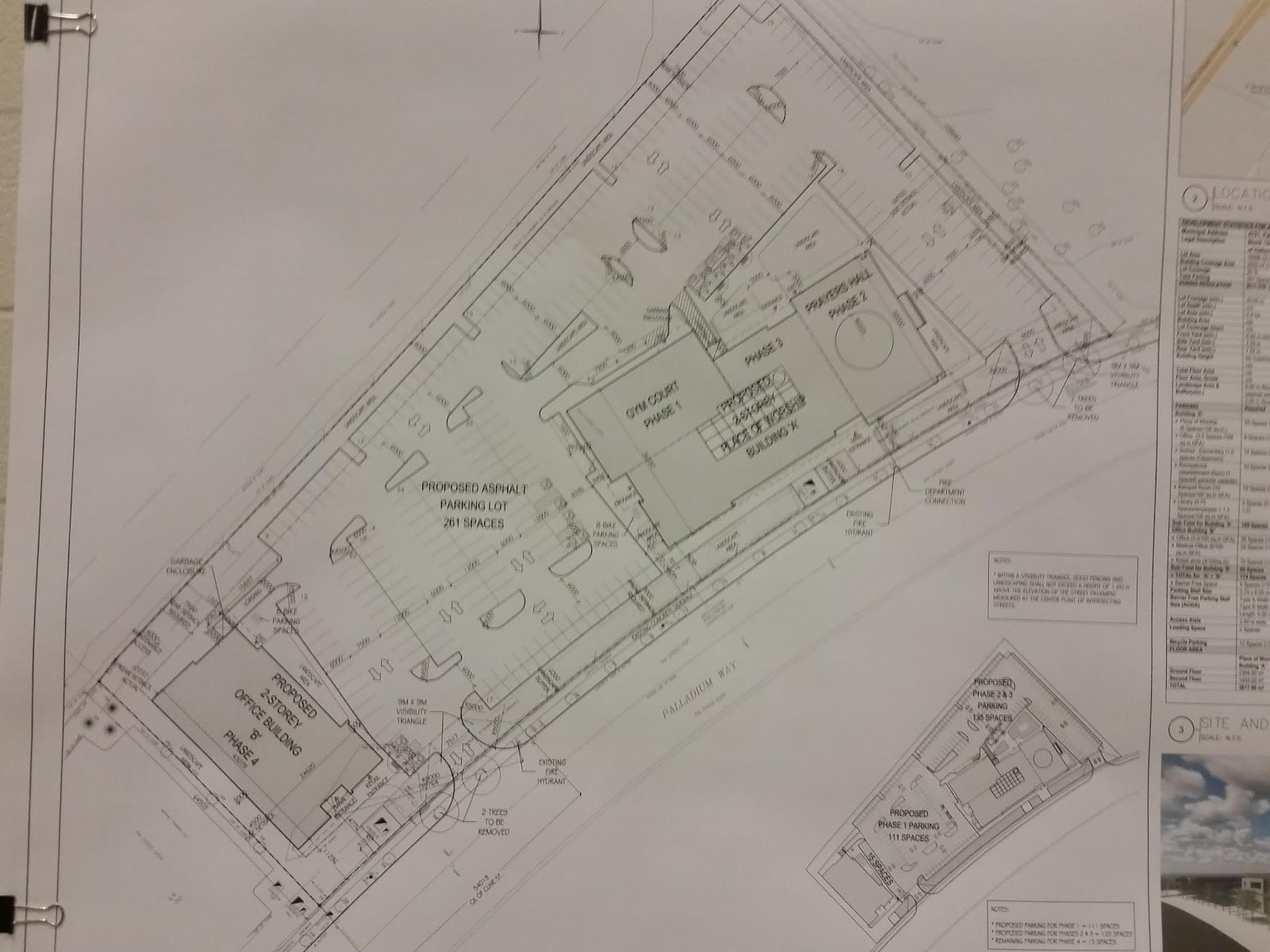 Despite having two churches just down the street, this parcel of land is currently zoned as a business corridor for ‘prestige type office and industrial use’ under the city’s Official Plan, which does not include places of worship.

As such, the HIA also requested a rezoning to permit ‘Institutional Use’ aka places of worship, subject to a risk assessment. The mosque will have 261 parking spots available, which led into questions from members of the audience primarily over traffic concerns, but there were also inquiries as to how nearby school operations would be affected, as well as suggested additional transit operations for worshippers.

Concerns were raised over the aerial view in the slide show when it appeared that Cline and Ferris streets would be opened up with access to Palladium. City staff assured the residents that was an error in the printout and there are no plans to construct such openings, at least without some proper research and public consultation.

Another resident asked if the proposed parking would be enough to accomodate Friday prayers. The HIA president said that it is estimated that 500 to 600 people would be in the prayer hall at that time, meaning that all other activities (the gym, medical centre, classrooms) would be suspended during praying.

He also said Friday prayers usually take place between noon to 3 p.m. and not during rush hour traffic, and the mosque encourages their congregants to carpool. Security guards will be also posted to prevent people from parking illegally in their lot who are not attending mosque services (similar to what Whole Foods in Mississauga’s Square One is doing right now).

Burlington city staff said traffic impact studies were done at five times during a regular day, and those results will be submitted to Halton Region for approval. Obviously, people are concerned that regulars would be using their residential streets to park their cars if the lot becomes full.

Another person asked whether they could look at scaling things down, reducing the size by removing the gym and the other amenities and just have the mosque. A woman in the audience answered that the gymnasium will have areas that would allow accommodation for Muslim women, such as those wearing the hijab.

But besides the traffic concerns, overall there was not much contention over whether a mosque should be built. There was one man who got up, citing some statistics from a Toronto real estate report that came off to the room sounding like he was making remarks about how more Muslims were moving into this neighbourhood, to which a young Muslim gentlemen retorted, “my friend, I think you should think carefully about what kind of question you are asking.”

A city staff member quickly confirmed that a place of worship, whether it’s a mosque or something else, is allowed anywhere under Burlington’s Official Plan.

Several years ago, Mississauga saw a contentious battle over a mosque in the north-end neighbourhood of Meadowvale, which saw some heated emotional opposition from non-Muslim community members citing similar concerns over traffic and safety that people in Alton Village raised. That debate in Mississauga was over renovating an existing building already being used as a mosque, but discussion was overshadowed by very controversial, somewhat racist rhetoric from certain people.

For Burlington residents in the Alton Village area, they have demonstrated more rationality and willingness to listen when posing their concerns to city officials and members of the Muslim community.

Thomas Douglas, the planner on the mosque file, advised residents they could submit written comments until Jan. 29. He can be reached at 905-335-7600 ext. 7811, and by email at thomas [dot] douglas [at] burlington [dot] ca

Comments will be included in the staff report about the application which will be posted on the Burlington city website.

What do you think of the potential new mosque coming to Burlington?