Police are seeking to identify three suspects as they investigate a violent robbery in Milton.

The incident happened around 10:45 p.m. on Wednesday, August 29 at the Big Bear convenience store at 890 Main Street East.

According to police, three males wearing distinctive masks entered the store, confronted the lone staff member, stole a large amount of cash, and fled in a vehicle.

The first suspect is described as a male wearing black pants, black shoes, a black hooded jacket, a white bandanna covering his face, and carrying a grey backpack.

The second suspect was wearing black pants, a grey hooded jacket, black gloves, and a mask with a bushy white moustache and white eyebrows.

The third suspect was wearing a black sweater and a mask with a brown moustache and eyebrows. 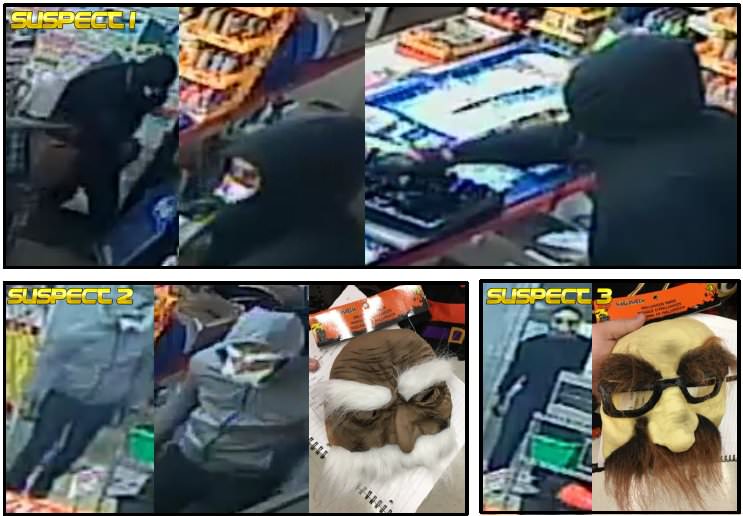 The investigation has lead police to turn their attention to an incident that happened earlier the same night at 8:35 p.m., in which two black males reportedly entered a store within the plaza at 1095 Maple Avenue.

The first suspect in this incident is described as a black male in his early 20s, 6 feet, with a medium build. He has black hair and a goatee, and was wearing a black shirt, black pants, green socks, and bike sandals.

The second suspect is also a black male in his early 20s, 5’10, with a muscular build. He has a goatee and was wearing a black hat, red fade pattern t-shirt, black pants, and black shoes.

The two suspects left the area in a green convertible, police say.

The investigation is ongoing.

Here's Everything You Need to Know About Parking this Family Day at Square One
February isn't everyone's favourite month because of the cold and snow that often accompanies it, but the shortest month of the year has a few things going for—namely Valentine's Day and Family Da
END_OF_DOCUMENT_TOKEN_TO_BE_REPLACED