Who is Running in Burlington's Municipal Elections?

With a number of issues of importance in this upcoming election such as growth and development, a solid field of mayoral candidates and three vacant council seats where a new councillor will be selected, elections this year are bound to be interesting to say the least.

Here is a brief primer on who is running in Burlington's municipal elections.

Meed Ward is promising a more transparent city hall, keeping an arms length but professional relationship with developers, challenging the "no" culture when it comes to new ideas, but also having a 'respectful attitude' towards citizens' input. Wallace says he wants to bring 'vibrancy' back to downtown, suggesting that land at Upper Middle Road and Appleby Line be rezoned into a "Liberty Village West" of mixed use development to attract more young people and jobs.

Goldring believes that he has demonstrated the skills "to bring people together to work in unison for the benefit of the whole community so that Burlington is an affordable, inclusive, healthy, sustainable and prosperous city where great opportunities are available for everyone," the mayor says on his website. Woodruff says congestion is not a natural phenomenon but a symptom of the lack of planning and poor development, focusing his platform on traffic light synchronization, balancing the budget and limiting residential developments to 6 storeys.

It's too early to tell whether the other candidates will truly give the incumbent mayor a run for his money or if people are still satisfied with the way Goldring is running the city. For now, the one certainty is Burlington is not lacking in choices for their next mayor.

Unlike neighbouring Peel and in other regions, Halton still has an election for regional chair.

First elected in 2006 after a career as a provincial MPP and federal MP, Gary Carr is running for his fourth term as chair. For some time, it looked as though he would be acclaimed, but Anne Marsden registered to run as the deadline came and went.

Marsden is a former 2014 Burlington mayoral candidate and also ran for regional chair back in 2000, but as of this writing she has no information on her website. Carr is running the classic frontrunner campaign, touting his holding the line on taxes, investing in infrastructure, and job creation.

Some of the candidates running in Ward 1 (from left to right): Vince Fiorito, Kelvin Galbraith and Arlene Iantomasi

With the retirement of veteran councillor Rick Craven, eleven candidates have stepped up to put their names forward to become the new councillor for this Aldershot / Tyandaga neighbourhood area ward.

There are a few that have run for office before: Vince Fiorito was the Ontario Green Party candidate for the Burlington riding in the June 7 election. Jason Boelhouwer, a sales manager for a long term care facility, previously ran against Craven in 2014 and Arlene Iantomasi is a Halton Catholic school board trustee first elected in a 2007 by-election.

Some of the Ward 2 council candidates (from left and right): Kimberley Calderbank, Roland Tanner and Lisa Kearns.

The downtown area ward where it has literally become ground zero for all the incoming development applications in Burlington will see change as well, as incumbent councillor Meed Ward is running for mayor.

While Wiebe and Shkuda did not provide any website information (and in Shkuda's case, contact information as of this writing), the four others tout community volunteer experience and varying degrees of "involvement in city building." Like the mayor's race, Ward 2 is not lacking in choices for their next councillor.

Some of the Ward 3 council candidates (left to right): Darcy Hutzel, Gareth Williams and Rory Nisan

A 30 year veteran of city council first elected in 1988, incumbent Coun. John Taylor is not standing for reelection, which opens up the door for five candidates looking to take his place. Those candidates are Lisa Cooper, Darcy Hutzel, Rory Nisan, Peter Rusin and Gareth Williams.

Cooper has been a perennial municipal election candidate dating back to 2000, when she ran for regional chair, and since 2003 when she started running in every election against Taylor leading up to this one. With Taylor's retirement, perhaps the strategy is familiarity with the residents may give Cooper an advantage.

Nisan and Williams have been most active on social media and appearing at public events since they announced their intentions to run months ago. Nisan is a Canadian diplomat with 10 years of experience, and Williams chaired the city's sustainability committee and served on the mayor's emergency preparedness committee.

Hutzel touts a business background spanning 25 years in various fields, while Rusin is a real estate agent and former mayoral candidate who actually ran in the June provincial election under a new political party called the Consensus Ontario Party. 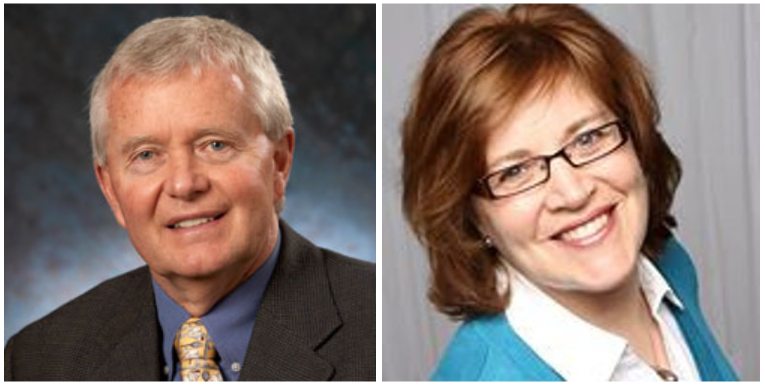 Coun. Jack Dennison looks to be facing an easier time in his re-election bid as he is only facing one opponent. But Shawna Stolte has an impressive resume that includes three decades working for the provincial health and social services ministries as a social worker / mediator, developing her own social enterprise in Burlington and volunteering with heart and stroke / cancer societies.

At least there won't be issues of vote splitting as there are only two to vote for in Ward 4 and the winner must have a majority of residents' support.

Some of the Ward 5 council candidates (from left to right): Daniel Roukema, Coun. Paul Sharman, and Wendy Moraghan

Four years ago, Sharman faced two challengers; that list has doubled to four and it's a rather impressive list, as the other candidates, Wendy Moraghan, Daniel Roukema, Mary Alice St. James, and Xin Yi Zhang, all have diverse backgrounds who could potentially give Sharman a challenge.

Roukema is a community development and public relations professional who served on the board of directors of Community Development Halton, Moraghan is a former constable with the Halton Regional Police, St. James is a retired elementary school principal and IT professional Zhang has asked residents to call him XYZ if they are unsure how to pronounce his name.

Some of the Ward 6 council candidates (from left to right): Coun. Blair Lancaster, Ken White, and Angelo Bentivegna

Coun. Blair Lancaster, a former Miss Canada from 1974 and who previously operated her own spa business in downtown Burlington, won a close race in 2010 against a former Burlington alderman to become the councillor, then squeaked by 10 other challengers in 2014.

Trustee and Board Chair Andrea Grebenc is running for another term and facing one other candidate, Diane Miller.

Trustee Amy Collard was acclaimed to another four year term as no other candidates filed to run at the deadline.