Major Changes On the Table for Downtown Burlington

Inhalton.com has documented a number of developments in the downtown area of Burlington this past year that really got people’s attention. Whether it’s this 23-storey condo going up right across from Burlington City Hall, or this 26-storey condo, there is no doubt that redefining the Burlington downtown skyline is an important issue for the city going forward.

City officials and planning staff are set to present recommendations* for downtown Burlington at the Jan. 23 planning committee meeting.

The report will include additional information requested by council, said city spokeswoman Sharon Will, such as background information regarding the urban growth centre boundary, proposed heights compared to the existing in-effect heights of the current Official Plan, and potential redevelopment sites.

Ward 2 Coun. Marianne Meed Ward posted this video on the city’s proposed changes (the original date of the meeting was supposed to be Jan. 16, but has since been changed to the 23rd):

In an accompanying statement on her Facebook page that went along with her video, Meed Ward said she believes the plan will radically change downtown Burlington by replacing the low-rise character and historic buildings with modern tall buildings, which to her the rationale was unclear. 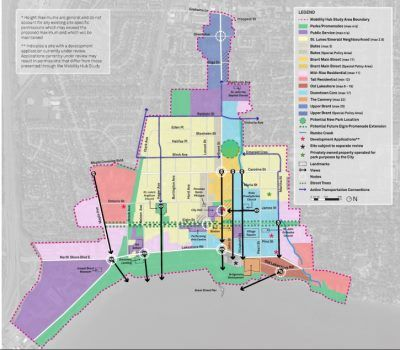 The councillor indicated that the city is already ahead of its growth goals and is expected to meet its 2031 target in the next few years. Meed Ward says the city is giving away height and getting nothing in return, like negotiating affordable housing, family units, public parking or heritage protection.

Meed Ward announced in another subsequent blog post on her website she was introducing a number of motions at the Jan. 23 meeting, such as:

While height and density has become a primary focus behind Meed Ward’s motions, she did mention how affordable housing could have been used as a bargaining chip for this increased height and density. While it been demonstrated that negotiating with developers to allocate units for affordable housing can be done, not all cities have figured out ‘the magic formula’ to doing that yet.

Mississauga managed to negotiate with Daniels Corporation to allocate a percentage of new units they were building in the City Centre area near Square One for affordable housing. Barrie also approved an Affordable Housing Strategy back in 2015, with the goal of creating 840 units by the year 2024. Beyond Canada’s borders, Madison, Wisconsin tried implementing a mandatory inclusionary zoning ordinance, requiring new developments to have 15 percent of their units at affordable prices to people of modest incomes in exchange for density bonuses and other incentives, which ultimately proved unsuccessful.

So if you want to ask why city councillors didn’t ask for affordable housing units or more in exchange for having more taller buildings in downtown Burlington that could alter the skyline of the traditionally mid-sized Canadian city, then you should come to the planning committee meeting at City Hall on Jan. 23 at 6:30 pm.

Photo courtesy of the City of Burlington

*Editor’s Note: The original version of this column stated city officials and planning staff are set to revise the planning policies for downtown Burlington at the Jan. 23 planning committee meeting. Policies aren’t being revised — a recommendation report related to the downtown will be presented. We regret the error.